Winter is falling in Kyrgyzstan and temperatures are falling. Some high mountain passes are blocked by snow and make some areas inaccessible at this time. We do not recommend traveling during these months.

Between April and May, the country wakes up after a long winter. The ger camps for tourists are still closed, but in rural areas you can always see people working in the fields. There are sometimes heavy rains, but the spring flowers are in full bloom by the end of April. The paths to the passes, which are snow-covered during winter, begin to open.

This is the summer time in Kyrgyzstan. Rain is rarely expected during these months and temperatures rise to an average of 27 ° C. The ger camps of Song Kol and Tash Rabat are open, but the nights in these mountains are still cold. Lake Issyk-Kul with its mild, temperate climate is particularly pleasant to visit at this time of year.

The ger camps close as the nomads are leaving the summer pastures and the days are getting significantly cooler. Travel is still possible in October if you are prepared to accept a higher risk of rain and unpredictable weather. At this time of year, you are likely to encounter far fewer foreign visitors. Winter approaches in November and December. It makes travel arduous and sometimes impossible in the last few months of the year.

At night it gets coldest at −8 ° C in January. The thermometer rarely falls below 18 ° C in July. While the nights in summer have averages of a pleasant 15 ° C, the thermometer drops to a cold -5 ° C between November and March. The temperature averages 4.8 ° C at night all year round.

With 9 rainy days, March and April are the rainiest months of the year. The August is the driest month of the year . From June to September, Kyrgyzstan is very dry with an average of only 3 rainy days each, the winter (November to March) is quite dry with 7 rainy days. An annual average of 5.8 days of rain falls per month.

According to neovideogames, the most helpful language in Kyrgyzstan for travelers is Russian. As there is a large minority of Russians, you will hear the language more often and will usually get further with it than with English. The Kyrgyz language has some similarities with Uzbek, although the two peoples often find each other incomprehensible.

In Kyrgyzstan, national cuisine revolves around lamb or horse meat and vegetables. Some of the best foods in the country come from the Dungans. In particular, try the excellent Dungan-style Laghman noodle soup with chilli, vegetables and meat. Dumplings and samsa can also be found, as can the ubiquitous shashlyk. For vegetarians, excellent salads and soups can be paired with local bread to make a decent meal.

For drinks there is of course Chai – Central Asian tea. Vodka is drunk all over Central Asia and nomads drink kumyss, the country’s powerful national drink made from fermented mare’s milk, on the jailoos. Russian beer is perhaps the best there is – for quality, Baltika is the right choice.

Tipping is generally not expected, but western style is the norm at the larger international hotels in Bishkek. So expect to pay a small amount to bellboys or housekeeping staff. For guides and drivers in Central Asia, tipping is part of their salary and, while not mandatory, is a great way to show your appreciation for their services.

Dressing conservatively is always advisable in mosques or in places associated with saints or nationally venerated people. There are large minorities of Russians in Bishkek and Karakol, which makes the dress standards in these cities a little looser than elsewhere. The most conservative part of the whole country is Osh near the Fergana Valley.

The currency in Kyrgyzstan is the So’m, although dollars are generally much more useful for shopping in hotels or shops. Outside Kyrgyzstan, Kyrgyz money is hard to come by. The best way to change money is to do so through your guide as needed, who will usually help you change money with local money changers – on the black market. Credit cards can be used in larger hotels and it should be possible to obtain an advance from the National Bank. 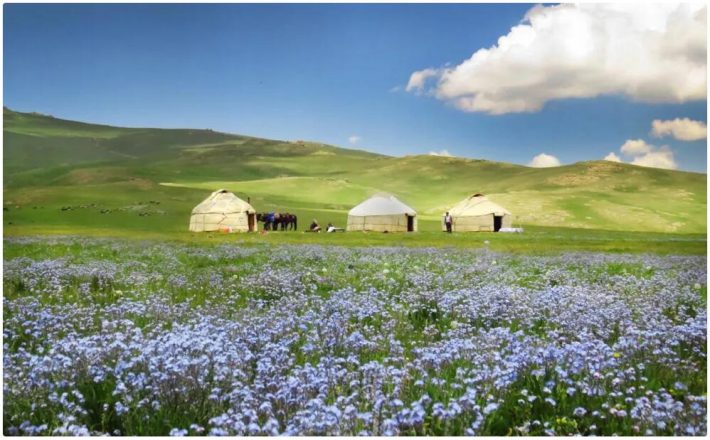