Still religious reasons and political transformations are at the origin of the artistic events produced during the Kamakura period (1185-1333), during which Zen philosophy and the power of the military caste had great importance on culture. Chinese-style Zen temples (kara-yo) arose: Kennin-ji (1202, Kyōto), Kencho-ji (1253, Kamakura), “Hall of Relics” (Shariden) of Engaku-ji (1279, Kamakura). Samurai architecture was born, of which, however, there are no examples (essential elements of the samurai’s home were the fusuma and kiki-chigaido, sliding doors, a room for conversations, niches for the kakemono and decorative objects, a veranda or shoin). The old aristocracy reduced their home (shinden-zukuri) to the main building (shinden). In this period the art of emakimono flourished on the themes of the history of temples (Shigisan-Engi-Emakimono, Kasuga-Gongen-Kenki-Emakimono), on the annual court feasts (Nenju-Gyoji-Emakimono), on war stories (Heiji-Monogatari-Emakimono), on illustrated biographies (e-den) of important monks (Ippen-Shonin-Eden), on other historical events (Banno-Dainagon-Ekotoba, Moko-Shura-Ekotoba). In painting, the portrait genre also developed in which Fujiwara Takanobu was famous (portraits of Minamoto-no-Yoritomo and Fujiwara Mitsuyoshi) for the sharpness of his psychological investigation. The same appears even more emphasized in the aggressive realism of the sculpture, in a series of portraits (Seshin and Mujaku in the Kōfuku-ji of Nara; the priest Shunjo, Tōdai-ji, Nara; Uesugi Shigefusa, Meigetsuin, Nara) and expressive images of divinity. In addition to Unkei, the main interpreters of the sculpture were Tanchei, Kōkei and the adopted son Kaikei, Kōshō, Jokei. Visit sunglassestracker.com for trips in Asia.

The tendency of sculpture to the stylistic ways of the past was accentuated more in the subsequent Muromachi period (1333-1573), which marked its decline a little, while the art of masks was affirmed in the context of the nō theater for technical quality and originality of creation. Artistic expression of the Zen spirit became in the century. XV monochrome ink painting (suiboku-ga) practiced above all in the monasteries of this religion by the priest-painters (gasō). With this technique, the theme of landscape, excelled Josetsu, Shubun, Sesshu (who was the greatest of all), his pupil Sesson, Kei Shoki. To these are added Nōami, Geiami and Sōami, who sought the decorative character of the landscapes following the traces of Chinese Sung paintings. The initiators of the Kanō school (Masanobu, Motonobu and Yukinobu) at the service of the Ashikaga court, open to all forms of art, belong to another current. In the characters of Muromachi painting elements of the Yamato-e tradition blend and relive in the style of the Tosa school. The arrival of the Westerners in the first half of the century. XVI became a topic in painting for Namban (Western South) themes. The spread of the tea ceremony (cha-no-yū) increased the production of metal teapots and all the ceramic tableware connected to it. Shinden-zukuri architecture fell back on increasingly narrow dimensions, determining the spread of the shoin-zukuri style.

Architecture had new orientations in the short Momoyama period (1573-1614) with the construction of a series of fortified castles that solicited new types of furnishings, marked by a sumptuous taste. From 1543 to 1611 were built the castles of Azuchi (which used for the interior decorations of the work of Eitoku Kanō), of Ōsaka, of the Jurakudai of Kyōto, of Momoyama, followed, among others, by those of Matsumoto, of Nijo, Hime-ji and Nagoya. Alongside the art of the castles, which characterized this entire period, that of the gardens (with lake and rocks) and that of the tea ceremony were developed, for which two new buildings were created, the cha-seki (tea room) and the cha-shitsu (tea pavilion) of extreme simplicity.

Proud of its past to which it remained fundamentally linked, the Japanese civilization of the Edo period, or of the Tokugawa (1615-1868), evoked its most traditional forms and aspects with ambitious celebratory rhetoric, giving itself a crystallized image, full of colors and picturesque, which was revealed to the encounter with the West in the century. XIX. However, the cultural closures of this period did not prevent the slow transformation of the taste of the new social classes and the development of the popular art of prints according to the style of Ukiyo-e painting., which constitutes the most important artistic fact of the time and one of the most interesting contributions to the origins of modern European art. The encounter with the West favored in Japanese art the development of some Europeanizing tendencies already in place at the end of the Edo period and whose activity became more vital in the Meiji-Taisho period.

With the foundation in 1876 of the School of Fine Arts with courses for teaching western oil painting techniques (the Italians E. Chiossone and A. Fontanesi taught there; V. Ragusa taught in the sculpture section). This section was then created in 1896 in the Tokyo School of Fine Arts, where Seiki Kuroda, who had stayed in France, taught. Alongside and in opposition to the Westernizing currents, which during the first half of the century. XX had gradually assimilated the influences of post- impressionism, Fauvism, expressionism, cubism, surrealism and abstract art, the current faithful to the styles of tradition was strengthened, whose activity reaches up to the present day, gathering the best results, however, in the field of decorative arts, where the authentic characters of Japanese art find greater availability of expression. 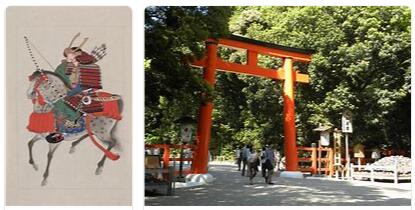